ocreations client WearWoof came up with a fun and relevant way to raise awareness and money for ending pet homelessness, and ocreations helped bring that plan to fruition (complete with a cameo in the Huffington Post!)

Located in the North Hills of Pittsburgh, WearWoof is “an upscale charitable resale boutique” that is “dedicated to raising funds for homeless pets.” If you were to stop into WearWoof, you would be greeted by Dolly, WearWoof’s hardworking “Business Cat and local animal welfare icon.” WearWoof’s mission to end pet homelessness is anchored by what the boutique calls “aggressive, affordable spay-neuter programming,” and that’s where the “Dolly for President” campaign comes in.

WearWoof’s “Dolly for President” campaign is the business’s latest fundraiser, and its goal is to raise enough money to spay/neuter 5,000 pets annually. ocreations worked with the WearWoof team to design this campaign and the support graphics that go along with it. 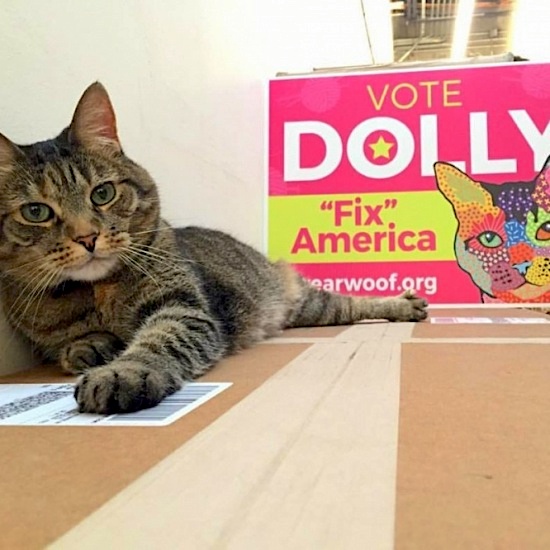 The presidential candidate herself. Dolly poses regally next to one of her campaign signs that ocreations created. Source: wearwoof.org

When our client at WearWoof came to us with the concept for this campaign, and the colorful illustration of Dolly, we couldn’t resist being part of such a unique project – especially with all the buzz surrounding this year’s election. The “Dolly for President” campaign and the “Vote Dolly” message, with its “‘Fix’ America” tagline, are not only fun, relevant, and tongue-in-cheek “punny,” but they are advocating for a good cause as well.

Since the WearWoof team already had the initial concept figured out, we were able to focus on designing the graphics that would really make this campaign pop. Our work for Dolly’s campaign included: yard signs, website design, web mail, banner ads, and other support graphics and materials.

The web graphics we designed are featured on both wearwoof.org and the “Dolly for President” campaign fundraising page on Crowdrise.com. Our yard signs are featured at several “campaign outposts,” such as the Western PA Humane Society and the Animal Rescue League, among others. Individual Dolly supporters can even purchase their very own ocreations-designed yard sign to support Dolly and her mission to help spay and neuter homeless pets! 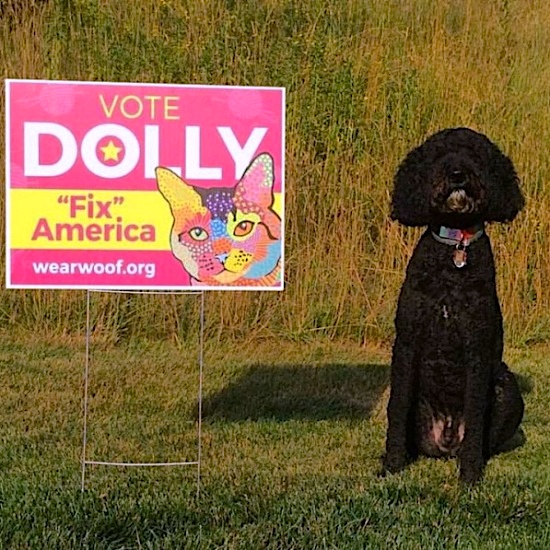 A Dolly supporter stands next to one of the Vote Dolly yard signs that ocreations designed. Source: wearwoof.org

WearWoof’s “Dolly for President” campaign launched on June 23, and it’s still going strong. We are excited to see that our graphics have not only spread across Pennsylvania, but the entire United States. In fact, back in July, shortly after Dolly’s campaign started, the Huffington Post even wrote an article about Dolly running for (cat) president, and one of our campaign signs made an appearance! You can imagine how excited we were to come across that one.

The Vote Dolly fundraiser has taken on a life of its own, and we love that our design is running alongside of it. If you want to learn more about WearWoof and the “Vote for Dolly” campaign, including how to get your own Vote Dolly yard sign, be sure to check out WearWoof’s website and Crowdrise page.

If you have a campaign or design concept for your business, like our friends at WearWoof did, but you need help bringing the idea to life, contact ocreations today!