ocreations recently worked with the minds behind Wilkinsburg newcomer Liam’s Fish, Wings & Things to build a brand for the new restaurant

CORRECTION: An earlier version of this story misstated that Ronald was also an owner of Liam’s, rather than a consultant for the business; it also did not clearly state that Jennifer and Ronald agreed to name the restaurant after Ronald’s son, Liam. The story has been updated to reflect these corrections.

UPDATE: Liam’s is officially open! Business is going well, and the food is great!

Liam’s Fish, Wings & Things is a new fast casual restaurant opening in Wilkinsburg that has a menu featuring fresh fish, fried chicken, and other unique meals. When Jennifer, owner of Liam’s, and Ronald, consultant on the project and business, first came to ocreations, they were looking for a simple logo with the name of the restaurant that would entice people to come in. What they walked away with, though, was not just a logo, but a story to tell people about Ronald’s young son, Liam, who inspired them so much they named their new business venture after him.
There’s no specific history behind Jennifer and Ronald’s inspiration for Liam’s Fish, Wings & Things, or the kind of food served there, so the fact that they agreed to name it after Ronald’s son, Liam, was the key “ingredient” for building the entire Liam’s brand.
Some of the initial design choices for the Liam’s Fish, Wings & Things brand and signage were a result of a few preexisting parameters. For instance, Liam’s took over an old Popeye’s Chicken location, so we had to use the existing road and building signs as the basis for our design. Jennifer and Ronald had also already chosen the blue and orange color scheme for the inside of Liam’s before they came to us, so we made sure to create a logo that incorporated those colors. 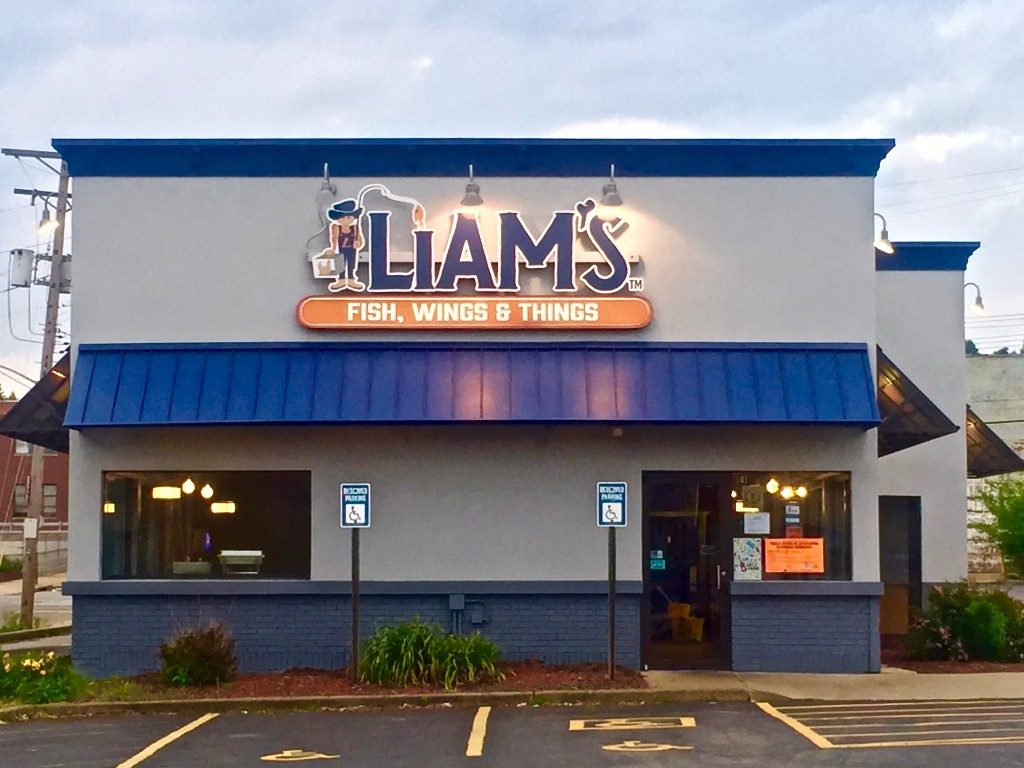 Originally, Jennifer and Ronald requested a logo that did not include a mascot or any other kind of character. We sketched and sent many logos without any kind of character, but eventually, we decided to include one version with a Liam character, simply because it “felt right,” and there’s never any harm in trying. Lucky for us, Jennifer and Ronald ended up loving the character direction. Success!
In order to build a brand, it’s important to have a story to tell. With a character in the Liam’s Fish, Wings & Things logo symbolizing Ronald’s own son, Jennifer and Ronald have a story to tell. The young Liam character makes Liam’s seem more welcoming and interesting, which not only makes it more likely that diners will come in, but also invites them to ask about the meaning behind him. 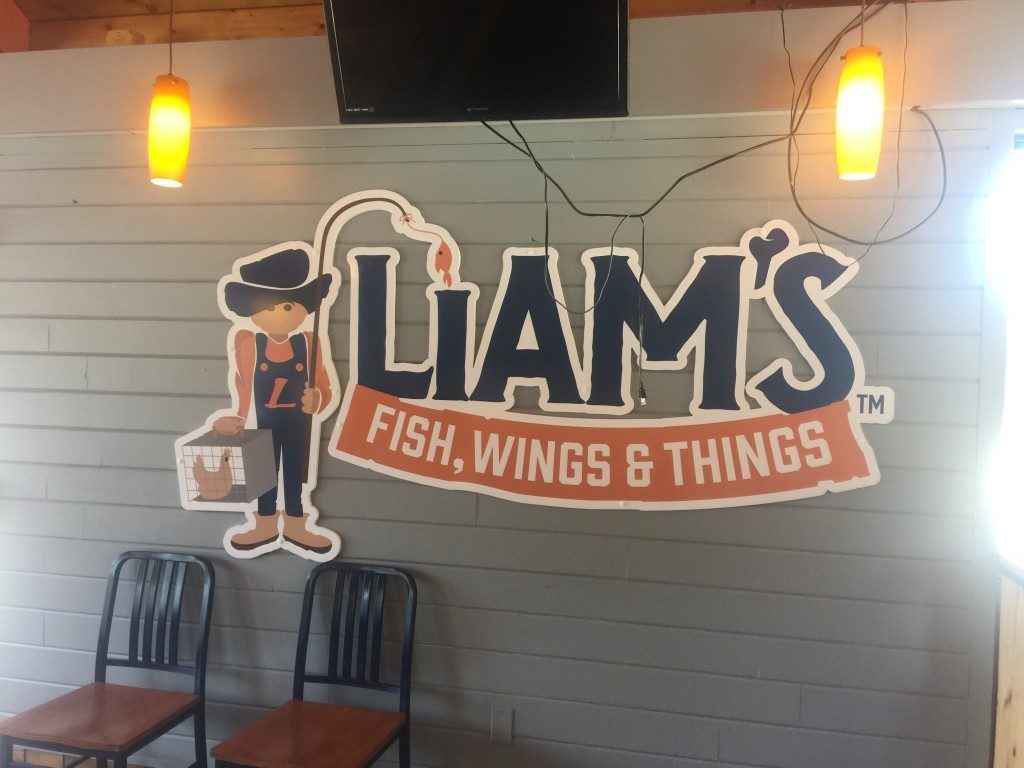 The look and design of the Liam character on the logo was inspired by a Huckleberry Finn-like character. This Liam would be a boy living on a bayou in Mississippi or Louisiana, where he catches his own fish and raises his own chickens. These details of inspiration add to the story of Liam’s Fish, Wings & Things, thus helping to further build a brand for the new fast casual restaurant. 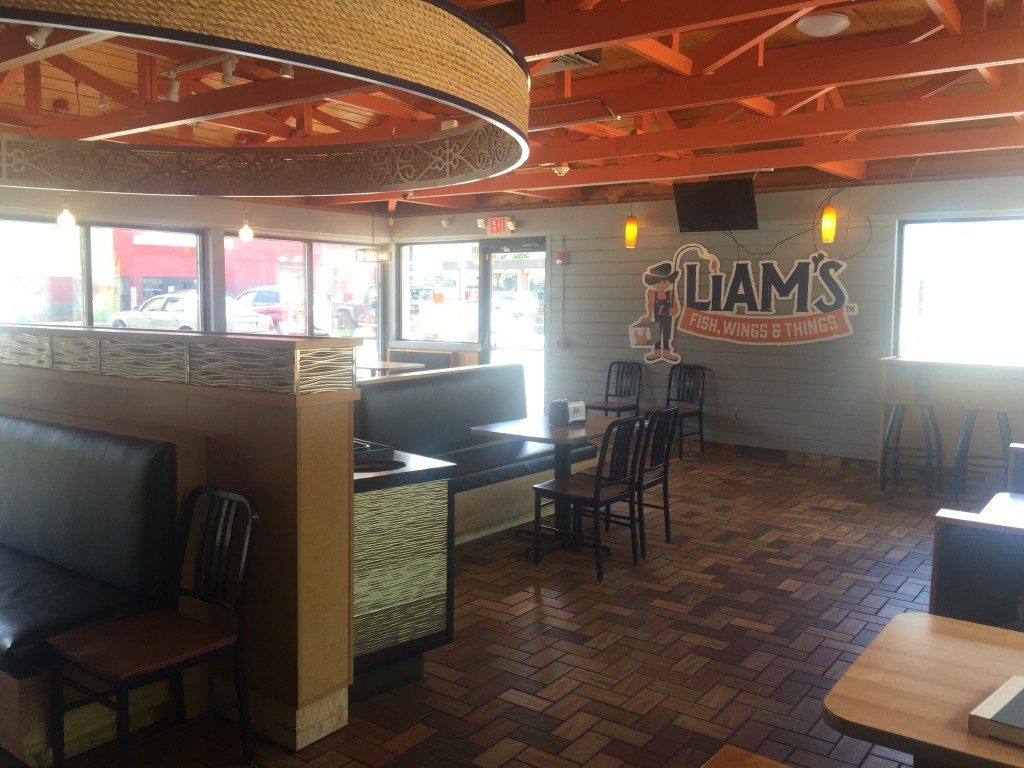 Liam’s Fish, Wings & Things will be opening in Wilkinsburg soon. We love the way all the details of this brand came together, and we can’t wait to see the customers at Liam’s enjoy it as well. We’re glad we could help Jennifer and Ronald out with branding and signage to make Liam’s Fish, Wings & Things come to life.
If you have the inspiration and aspiration to start your own new restaurant or business like Jennifer and Ronald did, but you’re missing the design and branding to get it off to a strong start, contact ocreations today!
By ocintern|2019-03-15T06:12:08-04:00February 12th, 2019|