All of us at ocreations are honored to be mentioned in the Pittsburgh Newswire regarding our work with the South Hills/Mon Valley Messenger. We really enjoyed creating this unique design that will be running between South Hills and Pittsburgh for the next few years! Read the full article below!

Distributed by PittsburghNewsWire.com
“Getting Local News to Local Media”
A web-based press release delivery and distribution service
targeting media in the Allegheny County
and Surrounding areas. 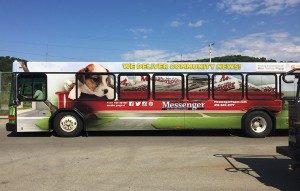